Toys for Tots: Providing a Message of Hope 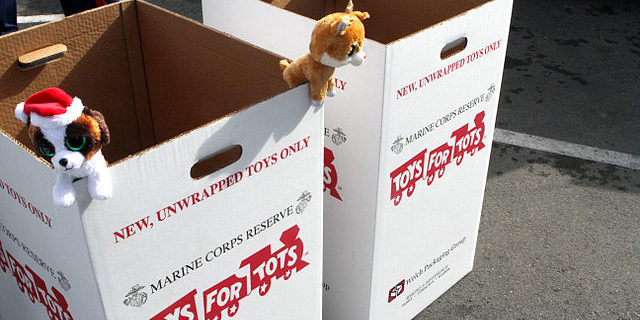 As the end of the year comes up, the holiday season comes into full effect. Many are preparing to get gifts for and get together with their respective significant others. Toys for Tots became a national campaign, creating toy drives every year and collecting thousands of toys in 1948. In the 1990’s, the Toys for Tots officially became a non-profit charity organization, deemed an official mission of the Marine Corps Reserve.

It has garnered support from celebrity figures like Bob Hope, Michelle Obama, and Ronald Reagan. Toys for Tots is designed to distribute the joy of Christmas to less fortunate children and inspire them with hope.

The Toys for Tots’ current mission is to collect new, unwrapped toys and deliver them to needy children during the Christmas season, and as of 2013 they have distributed almost half a million toys. There are countless different forms of activities involved with the Toys for Tots program, but the main purpose is the drives every year that bring in new toys. Kevin for Kids is a non-profit branch of Toys for Tots designed to carry on his mission of providing generosity and kindness to the world. In 2014, Kevin for Kids completed their 5th annual toy drive, providing over 1,000 toys to kids in need.

RQB with Toys for Tots Many different groups donated and contribute to Kevin for Kids, including members of Remote Quality Bookkeeping. Mark Kilduff, President of RQB, stated, “Kevin McLean was a dear friend of mine, and he had a passion for the Toys for Tots program. We’ve enjoyed doing this drive since the start of the Kevin for Kids program, and we without a doubt had yet another successful year.”

With programs like Kevin for Kids and Toys for Tots, society provides for those in need while continuing the legacy of great people like Kevin McLean.

To learn more about Toys for Tots, check out their website.

What is Sustainability Reporting?
October 6, 2021

How to Organize Invoices for Small Business Bookkeeping
September 1, 2021

Enrolled Agent vs CPA: Which One Do I Need?
July 19, 2021
Site-wide Search
Blog Categories
Clients Love Us