You are here:
Business ManagementPodcast 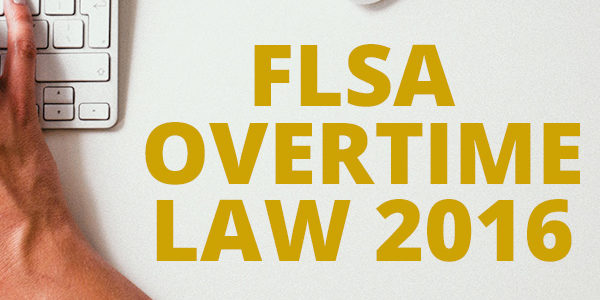 Listen To The Episode Here

Fair Labor Standards Act (FLSA) overtime law 2016 focuses primarily on updating the salary and compensation levels needed for Executive, Administrative and Professional workers to be exempt. This podcast discusses this new law and the fact that wage and hour lawsuits are up 456% since 1995. Listen to learn more about the new FLSA overtime law and how to avoid a lawsuit.

Excellent. Today we are going to be talking about FLSA over time law, which is something that I have no knowledge of and Jacob is an expert on. We’re going to go to Jacob and figure out what that even is first. FLSA Overtime Law 2016: They’ve updated the policy on exempt and non exempt employees, who you have to pay over time.

FLSA, Fair Labor Standards Act, basically what happened this year is they’ve updated the policy on exempt and non exempt employees, basically who you have to pay over time. The only thing that they’ve done, and there is a 20 point check that you can go through on the IRS.gov website to see if they’re exempt, if they’re non exempt. What they’ve done is they’ve raised the salary threshold for people so that you now have to pay them more money on an annual basis if you want to keep them from having to pay over time.

Got you. To avoid that fund checklist because I’m sure none of us want to go on a government website to figure all that out. What are some of the key points to this that people should be aware of?

Basically, it’s executive, administrative and professional workers. A lot of what you’re seeing is these people that have a manager title but don’t actually have the ability to make sole managerial decisions like hiring and firing. These are the people that have been put on a salary, $35,000 a year annual salary, and they’re working 60 to 70 hours a week. The government realizes that that’s not very fair so what they’ve done is they had an old threshold, you used to be able to pay them about 23 grand a year and not have to pay them over time.

Exactly. Now, what you’ve done is you have a new annual threshold of $47,476 annual for a full year worker. Or if you break it down weekly, $913 a week. That’s the new threshold. They got to be making over that in order for you to not have to pay them over time.

Awesome. It’s a fairly easy way to calculate the cost of that or at least for you as a business, correct? Or does this law somehow also affect the amount of money that a company has to pay out tax wise?

It really depends really case by case, which is why I’m having the conversation a lot with small business owners. Because they really have to determine for these employees how much over time are they really going to be working. Let’s say I’m a business owner who has somebody that’s making 40 grand with me that’s not entitled to over time right now, which is totally fine. But that’s going to go up to the threshold which is 47. If they’re not working more than 40 hours a week, or maybe they’re working 41 hours a week, it might be cheaper for you just to keep them at the $40,000 threshold and accurately track their time than it would to raise their salary so that you don’t have to worry about it.

Because otherwise you’re going another seven grand a year versus another possibly $1000 maybe, if that, if you actually accurately track it.

I heard that law suits are up 400 plus percent.

What industries are affected by all these mostly? FLSA Overtime Law 2016: Every industry is going to be affected.

Every industry is going to be affected. If you have a executive or an administrative employee that is marked now as exempt from over time that is making under $47,000 a year with you, then you’re affected. It doesn’t really matter what industry you’re in. Some larger impacts, I see a lot of it in the restaurant industry where they have these shift managers or the store managers. I see it a lot in the white collar. They have the office managers or the heads of the office at places like dentist and doctor’s offices, but really everybody.

Those positions, those are so hard to even track. I personally know that I work in a bar outside of this and my managers put in well over 50, 60 hours a week. Now, as far as tracking that goes, that responsibility that I presume would fall on the business owner or can they put it on some sort of like a time card scale?

No. It’s just like you’re responsible for getting accurate hours now and paying anybody at all. It’s going to be your responsibility to make sure that these people are properly tracked. None of this will take effect until December 1st of this year. December 1st of 2016 is when this is officially live. My suggestion to my clients right now has been, “Hey, those people that you think are on the fence, the people that are making under the new threshold, let’s accurately track their time for the next two months to see what they’re really working so that you can really have a good idea of what it’s going to cost you either way.” A lot of them haven’t been tracked so you got to start tracking them.

Preface it before the deadline. Don’t wait until the 1st to all of a sudden start saying, “Oh hey, as of the 1st, you have to start tracking your over time.” Do it now so you can get a general consensus of, “All right, this person averages about three to four hours of over time a week. Therefore, this will equate to X amount of dollars a year, which should is going to be less or more than that maybe threshold that you have to meet.

Correct. There’s a bunch of other stuff that goes along with this, which is why I advise them to reach out to somebody that has a little bit of HR knowledge on this. This is the last thing I’ll say on it. This new thresholds are a moving target, meaning they’re going to be reevaluated based upon percentiles of the entire nation’s average of people that are earning. It’s a 40th percentile. Basically, every three years this is going to be reevaluated. The target’s going to move again. If you don’t have a real way of tracking this, it can be very hard for you not only to be complaint now but in the future as well.

Because you’ve always got to be aware that looming next to you is going to be, within three years, a whole new genre of, I’m assuming, rules as well. They certainly love to add more regulations to it.

Mark, what does this even mean for you being a small business like yourself?

You just dub tailed right into the question I was going to ask. For a business owner that pays all his staff hourly, is he affected by this?

Yes and no. It depends if they were not paying the people the correct amount of over time because they said, “Hey, even though you’re hourly, it doesn’t really matter. Your max at 40.” If you’ve already been paying the over time and you have everybody as an hourly employee, then you can just continue to run your business per normal. FLSA Overtime Law 2016: You have to record and track this more diligently than you did before.

That’s a good thing for people to know, even though the majority of independent businesses out there probably have somebody on salary. It’s really important for people that are already doing the right thing by way of the new guidelines, that it’s steady as she goes and there’s no real impact. Only that you have to record and track this more diligently than you did before.

Just really make sure that your paper trail is solid and that everything that is overtime related is well recorded, well tracked and documented so you don’t get them banging on the door going, “Hey, we need papers.”

Make sure you’re updating your job descriptions for those people that are affected. The job descriptions typically, when you’re having people sign off on them, will post either a salary or an hourly amount so you’re going to have to be updating those as well if you’re doing those, which I hope people are but a lot of people don’t.

As an employee, I’m curious. Is this disclosed with an employee? Do they have to say, “Oh hey, by the way, if you work X amount of hours over time, we have to pay you …” blah blah blah. Or is this for the business owner’s knowledge only?

It’s not something that the business has to disclose at the time of hire?

Correct. It’s just a normal FLSA. It’s basically just an update to the Fair Labor Standards Act, which is a huge law that’s constantly updated by the Department of Revenue and Department of Labor.

Excellent. Mark, anything else to add to this?

No. Is there a webinar or more information we can learn through ADP?

All right. Thank you.

Sounds good. Jacob, thank you very much. As well, Mark, thank you as well for hosting this or at least letting me host it. You can join us next time for the next series brought to you by Remote Quality Bookkeeping.